In recent years, Turkey and the UAE have developed strong relations at the cultural, military and economic levels. Recently, Turkey has become one of the largest trading partners of the UAE, with annual bilateral trade between the two countries reaching $9 billion – which has led to a rise of 800 percent in the last Seven years at the level of trade exchange.

Within the framework of the privatization system in Turkey, Emirati businessmen were encouraged to invest in it in order to activate joint cooperation between the two countries. The two sides pledged to improve trade relations through joint projects and invite officials to meet and consult in the future in order to identify possible areas of cooperation in order to encourage Emirati investments in Turkey and Turkish investments in the UAE. The UAE announced the establishment of a fund to support Emirati investments in Turkey worth ten billion US dollars. This announcement was made by Mohammed Hassan Al-Suwaidi, Chairman of the Board of Directors of the Abu Dhabi Development Holding Company, who accompanied Mohammed bin Zayed on his visit. 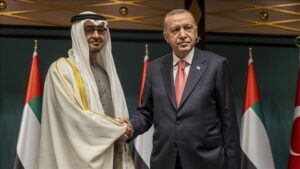 President Erdogan and Bin Zayed witnessed the signing ceremony of 10 agreements related to the fields of energy, banking, transportation, technology, environment, trade exchange and Emirati investments in Turkey, as well as Turkish investments in the UAE, and this is his duty to strengthen Turkish-Emirati relations at all levels.

In a tweet, the Crown Prince of Abu Dhabi described his talks with Erdogan as fruitful, explaining his strong optimism to open new horizons for cooperation and joint work between the two countries.

After the return of Turkish-Emirati relations, Abu Dhabi bought stakes in Turkish projects and established strategic partnerships, especially in the new Istanbul Canal project, which will link the Sea of ​​Marmara and the Black Sea and create a new trade line that opens up prospects for a broader commercial market.

The UAE has also purchased banks and shares in the Turkish stock exchange, in order to expand Emirati investments in Turkey to ensure the achievement of strong partnerships that support the Turkish defense industry sector, which has witnessed a wide boom in recent years, especially in the drone manufacturing sector.

A group of economic observers suggested that the Turkish president would agree to grant Mohammed bin Zayed great economic privileges in Turkey, as long as this would be in the interest of the Turkish economy and the local Turkish currency, and would strengthen Turkish-Emirati relations in terms of trade and investment exchange.

-Trade links between Turkey and the UAE

The future of Turkish-Emirati relations

Experts expect that the future of Turkish-Emirati relations is based on strengthening economic relations, especially after the return and strengthening of normal relations between them, as the UAE is one of the most important markets for Turkish products, and the economy depends on Emirati investment flows in Turkey among the important figures in foreign investment in Turkey.

Considering Turkey as one of the most important commercial markets for Emirati products contributes significantly to moving economic and trade relations to a more developed stage that benefits both parties, in addition to Turkey being a window to access a number of European and Asian markets, and this reflects the promising possibilities for developing joint economic and trade relations and access It leads to broader future horizons that predict long-term plans and projects.

You can visit our blog